Taking place over lunch at envecon, these three 20-minute sessions featured discussions between two experts on:

Participants discussed their experience in their respective fields and how they can be used as multidisciplinary catalysts for change in the environmental space. 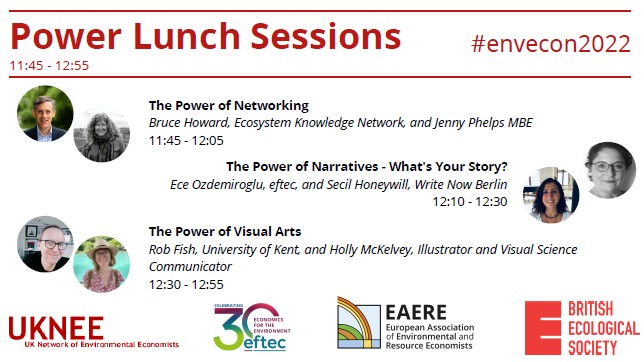 What is the role of networking in resolving some of our most complex challenges in the stewardship of land, water, and nature? In this conversation, Dr Bruce Howard, Director of the UK-wide Ecosystems Knowledge Network, and Jenny Phelps MBE, Senior Farm Conservation Adviser at the Farming & Wildlife Advisory Group in South West England, shared their insight. They spoke of their work in harnessing the expertise and experience of diverse professionals...including environmental economists.

Jenny Phelps MBE, specialises in environmental delivery through facilitation and stakeholder dialogue, particularly focusing on delivering Countryside Stewardship Priorities including Ecosystem Services and Natural Capital recovery, the Water Framework Directive, Integrated Flood Management, Common Land, and England Woodland Grant Scheme applications for the Environment Agency, Natural England, and the Forestry Commission. She is a Senior Farm Environment Advisor and team leader for the Gloucestershire Farming and Wildlife Advisory Group, a member of Defra’s Environmental Land Management Scheme Advisory Board, Trustee for the Foundation for Common Land, and Lead Facilitator on the Farmer Guardians of the Upper Thames Facilitation Fund. She is also a lead partner for the UK Soil Farm Carbon Code, leads on the Upper Thames Catchment Partnership and Cotswolds Payments for Ecosystem Services Defra pilot, and was Awarded an MBE in 2016 for ‘Engaging Communities in Environmental Protection’.

Dr Bruce Howard is Director of Ecosystems Knowledge Network. The focus of Bruce‘s work for the past 15 years has been to bring different organisations and professions together to tackle environment-related challenges. Linking the condition of the environment with ‚big issues‘ in society, such as health and economic development, has been an important part of this. He led the development the Ecosystems Knowledge Network (launched in 2012) and set it up as a Charitable Incorporated Organisation in 2015.  Bruce has the experience of work in local authority, in consultancy, in academia, and in the non-profit sector. Bruce originally trained as a landscape architect.

“Stories create community, enable us to see through the eyes of other people, and open us to the claims of others” – Peter Forbes

Why are narratives important? How can you use narratives and tell your story in the environmental space? Secil Honeywill, Founder of WriteNow Berlin, and Ece Ozdemiroglu, Founding Director of eftec, discussed these questions as well as their experience communicating narratives through varying mediums and styles to different audiences.

Secil Honeywill: Secil Honeywill is the founder of WriteNow Berlin, a Berlin-based playwriting platform. This year she is running the Climate Acts programme that encourages people to write short plays about the climate crisis in ways that are thought provoking and empowering instead of demoralising and paralyzing.

Ece Özdemiroğlu FRSA, is the Founding Director of eftec. She is a Member of the UK – Climate Change Committee working on Adaptation and of the Scottish First Minister‘s Environment Council. She is also the convener of the British Standards Institute’s Assessing and Valuing Natural Capital expert group which launched BSI:8632 standard on natural capital accounting.

Believing that communicating evidence is just as important as gathering it, she enjoys speaking to and writing for different audiences and bringing academic and applied research together through her Associate Editor position for the Journal of Environmental Economics and Policy and through co-editing or co-authoring 11 books.

Why are visual arts important in changing minds and inspiring learning? How can visual arts be utilised to communicate complex topics in the environmental space? Prof. Robert Fish and Holly McKelvey discussed these questions in the context of their collaborative experience producing the new graphic book: Valuing Nature: The Roots of Transformation

Prof. Rob Fish, University of Kent, is a social scientist and human geographer. Rob has published widely on the social-cultural and participatory dimensions of natural resource management and has played a prominent role in the elaboration of interdisciplinary approaches to the valuation of nature within environmental policy and decision making. He is a founding lead editor of the British Ecological Society’s People and Nature: a journal of relational thinking.

Holly McKelvey is an illustrator and visual science communicator based in Freiburg, Germany, whose travels and background in geology and ecology inspire her art on the relationship between humans and nature. Her work has been published in the British Ecological Society’s magazine The Niche, and she has collaborated with German Watch and PAN Germany, among others. She is also a founding editor and illustrator for Stonecrop Review, a literary magazine on urban nature.